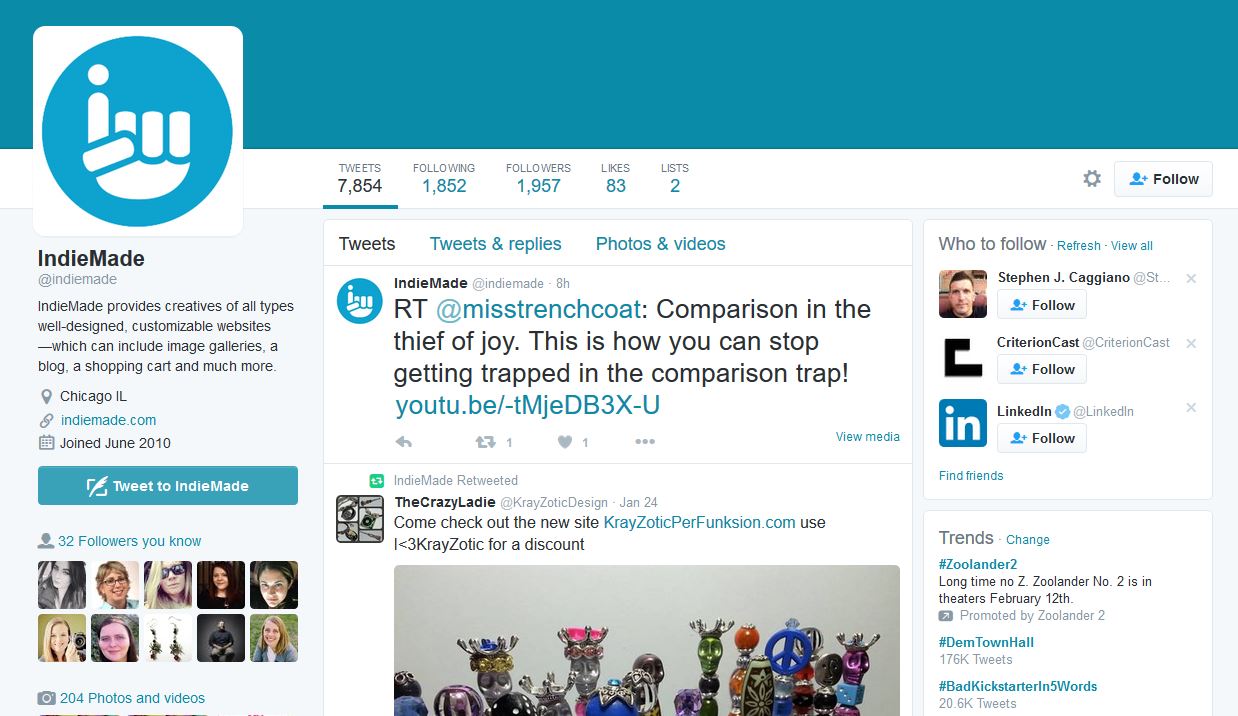 In any discussion of social media, Twitter generally comes in a poor second or even third to Facebook. But when you’re talking specifically about social media as a marketing tool, I say Twitter comes out on top in three ways.

First, Twitter is fast. The messages are short which makes it incredibly easy to skim.

Facebook is overloaded with lengthy posts, ads, a cluttered sidebar, chat boxes and notifications all over the place.

Second, Twitter is highly searchable. You can search a hashtag with one click, or type in a keyword to see all the related Tweets, accounts, and biographies.

Facebook’s search engine is better than it was a year ago but it’s still very difficult to get good results on a keyword search.

Third, it’s much, much easier to gain a following on Twitter than on Facebook. And I’m not talking about followers for followers sake, I’m talking about real potential customers, mentors and helpful friends.

Facebook doesn’t allow a “Page” (a business) to follow a person. So there’s no way to implement a follow / follow back system. You can meet potential clients in a Facebook group, but you have to connect via your personal profile, which some people prefer to keep private.

At this point, you’re probably saying to yourself, “if all of this is true, why does everyone swear by Facebook?” Good question. A lot of it goes back to sheer numbers. Facebook has a lot more users than Twitter.

The trouble is, Facebook has made huge changes to the news feed which makes it very difficult for a business to reach even their own followers. The average Facebook page post only reaches 2% to 11% of the people who specifically liked your page. That means that even if you can get 1,000 people to like your page only a handful will actually get your posts in their news feed.

Twitter, on the other hand runs a continuous timeline presented in reverse chronological order. Everyone who follows you gets your posts when you post them. If you post 20 posts in 10 minutes (which I don’t recommend), all 20 will show up in a row.

(Minor update: Twitter is now experimenting with a new system that will prioritize your Tweets based on your usage. This could actually work in your favor if you have very engaged followers, so don’t let it worry you.)

Let’s forget Tweets, Posts and timelines for a moment and talk about people. The goal of social media marketing is an increase in your bottom line. It’s about driving traffic to your store or proving your expertise so customers will use your service. I’m not saying that you shouldn’t have fun or use social media to make new friends. What I’m saying is that increasing your follower numbers just to have more followers is a waste of time. And if you’re thinking about buying followers, forget it. Best case, you’ll waste your money on users who aren’t your target audience. Worst case, you’ll get banned for breaking the Terms of Service.

How do you get these followers? Just follow the 4-step method.

It’s that easy. If you’re targeting the right people you should get 2 to 4 follow backs for every ten.

A couple of things to note:

Once you have followers, you have to keep them by post relevant or interesting content on a regular basis. At least 3 posts spread out over the day, every day is best. Make sure you have plenty of reTweets in the mix as well as replies and likes for your fellow Tweeters.

Skim your feed everyday for conversations you can join and new people to follow. You’ll be surprised by how many relevant users will show up thanks to Twitter suggestions and reTweets from other users.

When you see someone you want to reach out to, send them a personal Tweet using @TheirUserName – just remember, these Tweets are completely public so watch what you say.

On Twitter, there are no strangers. It’s like a giant cocktail party with people from all walks of life. I’ve used Twitter to contact new clients and find guest posters for my blog. I’ve even traded Tweets with my favorite celebrities.

Are you ready to give it a try? Create a new account if you don’t have one, then reach out to me by Tweeting @Cynthialil followed by your message. Then send a Tweet to @IndieMade and you’ll have two new followers.